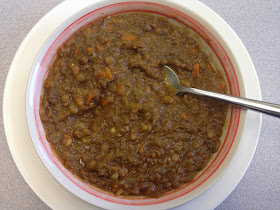 But guys, remember Beauty and the Beast?  Looks aren't everything!!!  Behind that plain-looking mask is all of this deliciousness...

This soup is one of my new favourites, and here is why...

I'm so predictable with my lunches at work.  Four days out of five I will bring soup, whether it's homemade or out of a can.  It's so predictable and so boring, but it works for me.  My co-worker / friend Tyler says "Classic Megan" every single day when he sees me and my soup.  And if I'm eating a canned soup, nine times out of ten it will be Amy's Organic Lentil Soup.  The problem here is that Amy's Soups are expensive when you purchase them one by one, usually about $4 per can.  Now friends, at Costco you can get an 8-pack for about $12.25, which reduces it to about $1.50 each.  And what's even better is that one time (my other co-worker / friend Ashley will totally be rolling her eyes at this story because she's heard it about five times), I even picked up the 8-pack on sale for $8 (quick math = $1 per can!).  Ever since then I have been chasing the dragon, but the deal has never reappeared.

And that's when I decided to play around with a basic lentil soup recipe that I had until I could get it to taste just like the regular Amy's canned Organic Lentil Soup that I love.  And, I think I got it.  I think this is really it.  I think this is as close as it can get without actually being Amy (and without using any organic ingredients whatsoever like the Ame-ster herself would have).  This soup tastes like the real deal.  I still love Amy's soup, but it's nice to be able to make it at home too.

High in protein.  High in fibre.  High in nutrition.  High in flavour.  Here is my rendition of the best...let me know what you think!

For a printer-friendly version of any recipe, simply click 'Print' below the title of any blog post.  Voila - a clean recipe without my ramblings or any pictures! 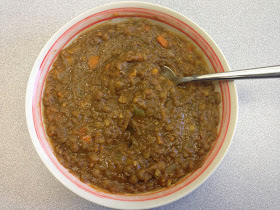 Directions
In a large pot, combine lentils, broth, water, bay leaf, and thyme over medium-high heat.  Bring to a boil, then reduce heat to simmer, cover, and cook for 20 minutes.  Meanwhile, heat your olive oil in a large pan over medium heat.  Add onion, celery, carrots, and garlic, and cook for 10 minutes or until vegetables are tender.  Add the salt and balsamic vinegar and cook for 30 more seconds.  Spoon the vegetables into the pot of cooked lentils.  Add the cubed potato to the pot.  Turn the heat up to high, bring the soup to a boil, then reduce heat to a simmer.  Cover pot and cook for 60 minutes.  Remove soup from heat.  If your soup is too thick at this point, add a cup of hot water or broth to thin it out, then heat for a minute or two longer.  Using an immersion blender, give the soup quick a quick blend or two, leaving lots of chunks and being sure not to puree the soup completely.  Serve hot.

Recipe Inspired By:  Ben & Birdy
What Was Cooking on Playing With My Food One Year Ago:  Man Pleasin' Chili

Hi everyone! I would love to hear from you, so please leave your comments here. To comment without a Google ID, select 'Name/URL,' or 'Anonymous' from the drop-down menu above. Thanks for reading and commenting!